Jimoh Buhari, spokesman for the Lagos State Chairman of the National Union of Road Transport Workers, Musiliu Akinsanya, aka MC Oluomo, has said no NURTW official was involved in the clash between a transport union and Okada riders in the Iyana-Iba and Ojo areas of the state on Monday.

Buhari, who spoke in an exclusive interview with journalist on Monday, said another transport union in the state, the Road Transport Employers’ Association Of Nigeria, was involved in the clash.

When contacted, the leader of RTEAN in the area, the Oniba of Iba, Alhaji Suleiman Adeshina, popularly known as ‘Jafo Authority’, declined comments on the matter.

Report gathered earlier reported that there was tension around the Lagos State University campus in the Ojo Local Government Area on Monday when RTEAN officials and Okada riders clashed over tariff increment.

However, spokesman for Lagos State Police Command, Muyiwa Adejobi, in a statement said normalcy had been restored to the affected areas.

According to the PPRO, the Commissioner of Police in the state, CP Hakeem Odumosu, has ordered the immediate deployment of additional police personnel in the area to maintain law and order.

Adejobi also said leaders of the affected Okada riders unit have been invited for an “urgent meeting”.

GOV.ABIODUN’S EX-AIDE TO BE ARRAIGNED IN U.S JUNE 8

THE TONY ELUMELU FOUNDATION AND DEG PARTNER TO EMPOWER 200 ADDITIONAL... 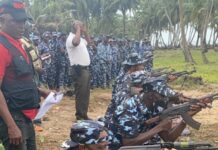