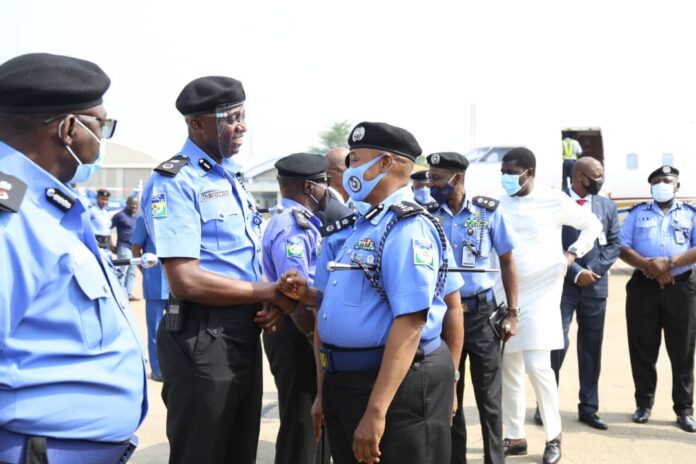 The Inspector General of Police, IGP Usman Alkali Baba, NPM, fdc has today commenced his first official visit to Lagos by issuing words of affirmation and authority to the men and officers under his authority and the general public.

The police boss who touched ground in Lagos at 10.22am earlier today began his assignment by paying courtesy visits to the Governor of Lagos State, Gov. Babajide Sanwo-olu in the Lagos House, Marina and the Eleko of Eko, Oba Akiolu in the palace in Lagos Island, Commissioned and Unveiled the Force Sports Secretariat Annex and the Force Swimming Pool at Police College Ikeja before settling down to addressing Force issues with the top echelon and junior officers at the Lagos State Command Headquarters.

The IGP affirmed that in spite of the challenges the Force is faced with, it still has to stay on top of the game. ‘Be that as it may, with the limited resources and personnel we have, we will do our job with more dedication and professionalism. I want to congratulate us that more than ever before the government and people of Nigeria have taken cognizance of our duties and responsibilities and then we have the support of all Nigerians that we are quite necessary to maintain and improve the society.’

He talked about the input that will be introduced, ‘for the avoidance of doubt, our recruitment into all cadre will soon be on course. And for equipment we have started taking delivery of riot equipment and other fundamental things from the Police Trust Fund. There will be intervention to training and retraining, logistics, and welfare.’

We are working towards enhancing our pension after service, curriculum in training institutions, service welfare schemes, and police housing schemes which officers can retire to after service. Our funding in budgetary allocation is being looked into and I think we have more than we ever had this year.’

On the improvement he expects from the Command, the police boss remarked: ‘An area where we need to improve in is crowd control and riots. You must also control the use of firearms. Once your men are assigned rifles, they must know that there are principles to follow.

They must guide against it been snatched by their carelessness. We must be civil but firm in discharge of our responsibilities. Never again do we allow our stations and personnel to be overrun to the extent that we will not be able to handle situations because of lack of discipline, cowardice, and so on.’

In his welcome speech, the host, CP Hakeem Odumosu saluted IGP Alkali Baba on his confirmation as the 21st indigenous IGP by the Nigeria Police Council. He also communicated milestones that the Lagos Police Command has attained under his watch. ‘It is pertinent to state here that the
Lagos State Police Command has been calm and relatively peaceful as crimes and criminality have been suppressed while most of the hoodlums and criminals who intend to raise their ugly heads have been arrested and prosecuted accordingly; and their leftovers, who are being frustrated as a result of Police proactive measures,
are leaving the state.

Generally, majorly noticeable crime waves in Lagos State are anchored on cultism, robbery in traffic, traffic congestion and gangsterism. However, with the anti crime strategies embraced by the command, these menaces have been reduced to their barest
minimum. At this juncture, permit me to state categorically that the command
has not recorded any violent crimes, especially, Bank Robbery
kidnapping, Banditry etc. in the last 20 months.’

The CP, however pointed out that it doesn’t mean that unscrupulous elements didn’t want to strike but the Police Command was proactive. ‘As a short reflection, below is the statistics of major breakthroughs of the command. In totality, the command was able to arrest Two Thousand, Two Hundred and Twenty Eight (2,228) suspects in connection with offences ranging from armed robbery, cultism, murder, hooliganism and defilement/rape in the state, while Eighty Seven (87) arms and
One Hundred and Twenty Nine (129) ammunition of various calibres
were recovered. In addition, Thirty Six (36) stolen vehicles were recovered by the command within the period under review.’

But it is not all gains as the CP Odumosu talked about the Endsars protest and the wanton destruction that ensued. ‘The IGP sir, it will not be out of point to briefly refer to the October 2020 violent ENDSARS PROTEST that was orchestrated by certain individuals and groups in the country to incapacitate our security
network and disrupt the country’s national unity and peace.’

‘This singular crisis, under whatever disguise or nomenclature, left blood,
sorrow and pains as many properties, both public and private, were
massively destroyed and some Nigerians lost their lives including our Police officers and men. In Lagos State, we lost 6 personnel, 16 Police
stations and 13 Police posts were set ablaze. Similarly 106 Police
personnel were injured while 62 patrol vehicles were burnt and some
vandalized.’

The CP closed with appeals for more support. He mentioned among other things, ‘like Oliver Twist, I wish to still appeal to the IGP, IGP Usman
Alkali Baba, NPM, fdc, to bless the Command with additional 13
Water Cannons, each for the 13 Area Commands on the land, while
at least, 5 Gun Boats, will be required for the 14th Area Command, Area “L” Ilase’, which is situated along riverine areas of the State, to  police and secure our waterways that have been experiencing heavy traffic presently due to the ongoing road constructions across
the state. In addition, the Command will appreciate the release of two (2) Police Helicopters to the Command to assist in fortifying the aerial patrol/surveillance of the Command with a view to tactically
tackling some of the crimes being experienced in the state and by
extension, in the South West.’

OVER 1 MILLION PEOPLE TOOK LOANS FROM BANKS BELOW 20% INTEREST... 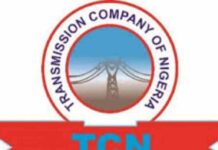 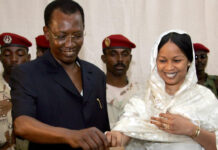 Jubilation Across Police Commands As Buhari Decorates Adamu As IGP

TIV YOUTH ORGANIZATION CALLS FOR PROSECUTION OF OKEY IFEJOKU, OTHERS OVER...