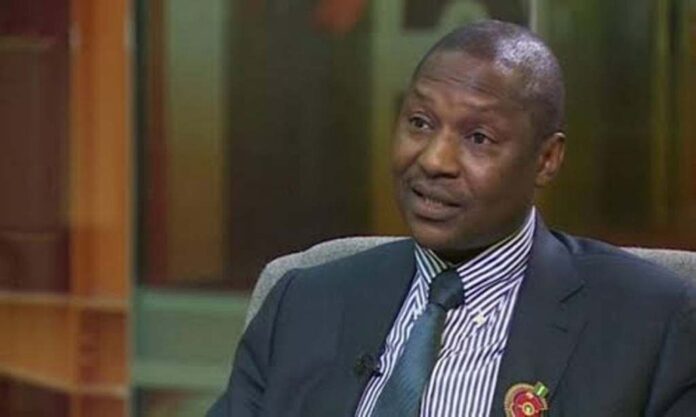 Minister of Justice and Attorney General of the Federation, Abubakar Malami

I didn’t file suit against Atiku’s citizenship, only a co-defendant — Malami

Following the wave of criticisms trailing the recent affidavit he filed before the Federal High Court in Abuja, the Attorney General of the Federation and Minister of Justice, Abubakar Malami, SAN, on Wednesday, clarified that he was not the one that approached the court to query the citizenship of former Vice President, Atiku Abubakar.

In a statement, he made available to journalist through his Special Assistant on Media and Public Relations, Dr Umar Jibrilu Gwandu, Malami, said he did not institute legal action on the citizenship or otherwise of the former VP.

He however explained that the affidavit he filed before the court was in response to a 2019 pre-election suit that was filed by a Civil Society Organization – the Incorporated Trustees of Egalitarian Mission for Africa.

“The matter in contention was part of the 2019 pre-election matters instituted by a Civil Society Organization – the Incorporated Trustees of Egalitarian Mission for Africa in suit no: FHC/ABJ/CS/177/2019 in respect of which Alhaji Atiku Abubakar, Peoples Democratic Party (PDP), Independent National Electoral Commission (INEC) and the Office of the Honourable Attorney General of the Federation was made a co-defendant.

“The issue had already been widely reported by the media since April 2019.

“It is unfortunate that stale news stories capable of causing confusion are repackaged and presented to the general public as current news”, Malami’s statement read.

Malami had in processes he filed through his team of lawyers led by Oladipo Okpeseyi, SAN, argued that Atiku is not constitutionally eligible to vie for Presidency.

The AGF told the court that Atiku is not a Nigerian by birth.

He said the former VP, whose home town, Jada, was formerly a part of Northern Cameroon, acquired Nigerian citizenship following a plebiscite that held in 1961.

Malami argued that having not been born a Nigerian or by Nigerian parents and having not met the provisions of Sections 25(1) &(2) and 131(a) of the constitution, Atiku, would be violating Section 118(1)(k) of the Electoral Act should he put himself forward as a presidential candidate.

Besides, he argued that Atiku, having contested election to the office of the Vice President before now, even though he knew that he is not a Nigeria citizen by birth, committed an offence under Section 118(1)(k) of the Electoral Act.

He contended that the effect of the June 1, 1961 plebiscite was to have the people of Northern Cameroon integrated into Nigeria as new citizens of the country, even after Nigeria’s independence.

Citing provisions of 1960, 1963, 1979 and 1999 Constitutions, the AGF, argued that “reasoning of the lawmakers in ensuring that the persons to be the President of Nigeria is a citizen of Nigeria by birth is because such a person is the number one citizen and the image of the Nigerian state.”

He told the court that where it is revealed that a person was born outside Nigeria before Nigeria’s independence in 1960, in a location which was never part of Nigeria until June 1, 1961, as in Atiku’s case, such a person cannot claim citizenship of Nigeria by birth.

However, Malami’s position had since elicited varying reactions, with a group under the aegis of Amalgamated Atiku Support Group, accusing him of being blinded by the 2023 Presidential election.

In a statement by its Director of media, Remi Adebayo, the group said it was laughable for a Chief Law Officer of the federation to behave the way Malami did on the citizenship of Atiku.

“In accordance with the Constitution of the Federal Republic of Nigeria, the Attorney General of the federation and Minister of Justice, Mr Abubakar Malami is expected to be the Chief Law officer of the entire nation.

“For Malami to join the suit filed by a hurriedly put together group known as Trustees of Egalitarian Mission for Africa (EMA) begs the question as to what the interest of Malami the AGF is.

“The suit before the court challenging the citizenship of Atiku Abubakar, it would be recalled, has been exhaustively dealt with by the Court of Appeal and same affirmed by the Supreme Court at the final judgment during the Presidential election petition tribunal.

“It is therefore laughable and inconceivable to see the Attorney General of the Federation putting his weight behind such an exercise in futility.

“For the avoidance of doubt, Atiku’s Nigeria’s citizenship is a settled matter, and anything contrary to that is a figment of Malami’s warped imagination.

“However, it must be expressly stated that Malami’s action is predicated on his ambition to run for the office of the President to take over from Maj. Gen. Muhammadu Buhari in 2023.

“This inordinate ambition of Malami can be glimpsed from how desperately he moved against some of his own party men who have indicated interest to run against him in the APC, but ultimately, Atiku Abubakar is seen as the biggest threat hence this heinous move to stop the former Vice President.

“But we have no doubt that this plot shall fail. Malami’s belief that he can use his position as the chief law officer and the instrumentality of the courts to achieve his vaulting ambition will also collapse on his face.

“We urge the courts not to allow itself to be a pawn in the hands of AGF Malami, even as we ask Nigerians to speak up and rise against this evil machination as it is capable of denying them (Nigerians) the much-needed good governance that would be brought by Atiku Abubakar when, God willing he is elected into the office of the President come 2023”, the group stated. 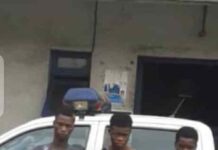 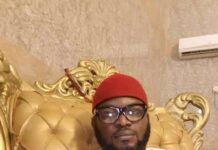 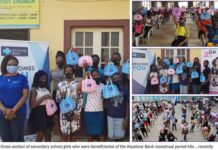 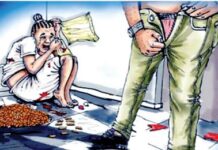 MY FATHER HAS BEEN HAVING SE3 WITH ME FOR YEARS —...