Hours after abducting students of Greenfield University in Kaduna state, gunmen on Thursday kidnapped two nurses who worked overnight at the General hospital in Idon of Kajuru Local Government,

While confirming the incident, Chairman of Kajuru local government area, Hon. Cafra Casino, called on the people to remain calm as investigation has commenced into the kidnap of the two nurses.

Though the authorities are yet to respond to the incident, Dr. Shingyu Shamnom, Medical Director of the hospital, told journalists that the gunmen wielding dangerous weapons gained access to the hospital through the fence.

According to Dr.Shamnom, the gunmen forcefully gained entry into the hospital, shot sporadically and whisked away the two nurses on night duty who came out and identified themselves as medical workers.

He explained that after hearing the gunshots, they had to stay at their various houses.

“We were in our homes until a call was put through to us that it was kidnappers who invaded the hospital, only to discover that two of the nurses on night duty have been taken away by the bandits.

“The kidnappers went away with the phone of one of the staff whom we thought was also kidnapped but he later returned,” he said. 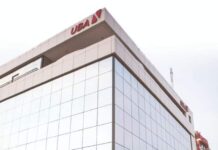